And a big hand for the lady needing no introduction…

Our “cosy in Brooklyn” loft was full of charm and lots of pre-Halloween welcoming goodies. It sat atop a traditional brownstone-fronted apartment in a tree-lined street with flower pots on the front steps. 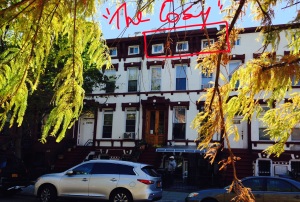 Never mind that we were the only ‘white f

olks; never mind the late night gunshots apparently aimed at sorting the dispute among three now-wounded near-neighbours; never mind the sirens all night and the bin men at sunrise; never mind….We ‘experienced’ it all with (apple) relish!

barely matched the magic of the Manhattan skyline at dawn, at dusk from the Brooklyn Bridge, late at night, and in the seagull studded twilight wake of the Staten Island Ferry.

The scariest experience – getting separated in the subway. Annie had an iPad and an iphone. Me? Nothing.

My lost phone was in the post en route from Dublin! Annie is on the platform, signalling madly and badly! I was in the train and moving on! Anxious hours later we found each other back at “Cosy” in Brooklyn! 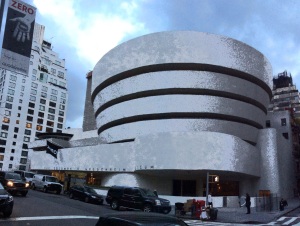 What tour of NYC is complete without an excursion to the original Guggenheim, then on to MoMA? Now we have the app!

We punctuated the four weeks in New York with a few 1 and 2-day trips to discover America in formal Washington DC stateliness; her splendid New England “leaf fall” – oohing and ahhing our faces off

“Autumn is a second spring when every leaf is a flower.” Henry David Thoreau. 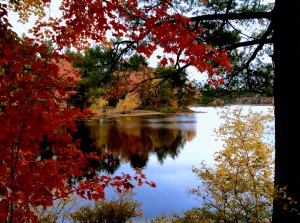 and to see both sides of famed Niagara’s “water fall” amazing!!!! Especially the boat trip into the mist at the base of the falls.

On the American (smallest view) side

Tripping out early on the “Maid of the Mist”, Canadian side

From the Observation Deck, Canadian side

Our Washington folly was a 37-hour trip with Chinese tourists. We were the minority group again! Hadn’t we read the small print? What small print? The bit about the commentary being available in translation from Cantonese and Mandarin…No…Did you see it? No…You? No…Me neither… Fortunately the guides’ occasional translation into English kept us somewhat in touch with the itinerary. And the all-you-can-eat Chinese buffet meals were generous, diverse, and congenial. (NB: any tour featuring a pick-up point in Chinatown will likely comprise predominately Chinese companions.)

The mighty US Capitol….undergoing de-rusting

Abraham’s DC- how far from Ferguson?

The Washington Monument at sunset

Scaffolding around iconic sites has haunted us all year in every country and yes, there it was: the Capitol dome, caged in scaffolding! What a metaphor for “the American Dream”? There is rust in the metal – “not weakness”, the Capitol guide hastened to add.

All of Washington DC is monumentally impressive and the security chillingly real! The Vietnam War Memorial enthralled Annie and I – powerful in its subtle and elegant understatement. But there was little or no interest shown by our Chinese tour companions who seemed mesmerized by the grandeur of the other iconic sites.

World Trade Centre Memorial visit…..On the perimeter of the site I began to feel emotional. Walking on, the feelings became stronger.

All I could see were people and a few trees. By the time we reached a small kiosk asking for donations, I couldn’t see anything – too many tears. Annie had to help. Thank god for sunglasses!

Meanwhile my tears became a flood and I walked away to a quieter spot. I hadn’t even reached the Reflecting Absence space! When I did the tears slowed to a trickle and I gazed down into the magnificent emptiness of the falling water, the loss and futility, the hope of water, the thousands of names, the re-building, The Freedom Tower, the ever-present hum of New York traffic and I became grounded again AT GROUND ZERO!

Marie’s Crisis at 59 Grove Street (near Christopher Street) “…a filthy fascinating and fun filled gay bar with a pianist who plays show tunes and all the guests are expected to sing along….” Which we did. Thank you, Akwa! 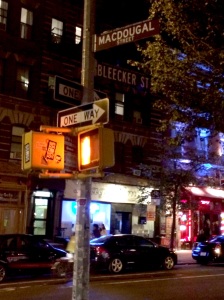 In honour of Molesmama’s enduring love for Fred Neill, a pilgrimage to where two famous New York Blues Streets intersect was an absolute must.

New Yorkers are mostly helpful if you have a map in your hand, if you are navigating a crowded sidewalk you can get trampled. So it pays to keep fit.

Keeping fit in NewYork!! Leaping out of the Brooklyn bed at 5am, leaping into the shower, 6 layers of clothes, leaping down 3 flights of stairs. Cold dark street, brisk walk 4 blocks, bus for 15 minutes, 2 blocks to subway, 45 minutes to 49th street, brisk walk 3 blocks to 8th Ave. Queue for small group day tour, leap in and out of minibus 35 times, walk around every icon. Tip the guide, nearly dark again, find a bar, no decent coffee in sight! Enjoy a well earned Margarita, tip the bar person, start leaping again (backwards) all the way home to Brooklyn!!

There’s too many tourists in NYC. It’s too big. It’s too busy. There’s too many tourists. Too many people live there.  The population doubles every day when the work force comes in from New Jersey, Long Island, Yonkers. Traffic is soooo slow, walking is quicker! Besides all this, the biggest disappointment for me, between the terrible coffee served only in paper cups, the Disney takeover of Times Square, the arcane, possibly elitist exhibition at the Guggenheim which left me cold, and not getting back to Grand Central Station for the 2nd time to count it’s 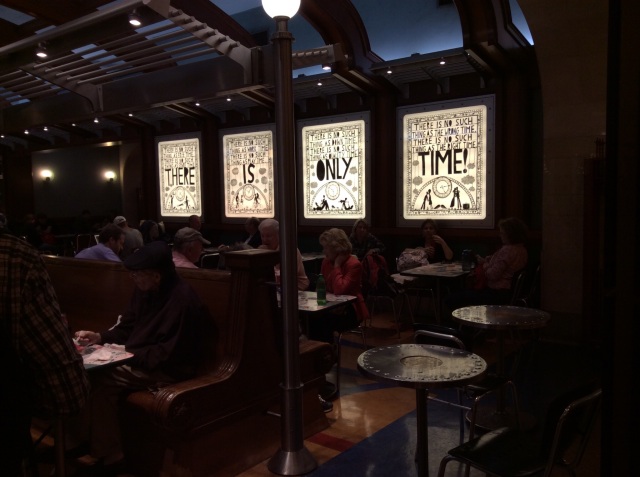 The lone Bald Eagle we saw in NYC….

117 platforms…. I’d have to say the biggest disappointment was that I only had such a small nibble. That, and too many tourists….oh, did I already say that? 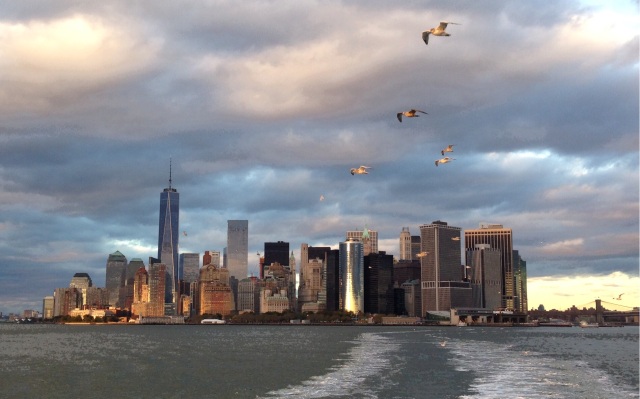 Guess where we’re goin next…can we get to the Mississippi from here?