From Big Easy to Bootleg…..

At the Mississippi Esplanade

Mississippi River running sweet and wild,
running like a slippery dip,
aslidin’ side to side,
dancing Dixie round the Basin,
jelly-rolling round the waist
in hot cuisine of New Orleans
our Mamas never got to taste

like an Alligator pie
then a big ole bowl of gumbo
followed up with jambalaya
jambalaya – it’s a language of its own
you learn to speak on Bourbon street
between the slide trombones….
oh yeah….burpin’ poboy

We checked in late to our modest hotel in the famous French Quarter in New Orleans, Louisiana, tired and hungry after flying from New York via Charlotte, North Carolina. The very obliging hotel doorman steered us foodwards thus: “Jus woke on down the street a ways to the corner, take a rart one blark, take a left, and ya’ll see a few places”. So off we went. Suddenly we’d left our quiet, unassuming street marles behind and BOOM! We’d hit Crazy Street!! Bourbon Street may well be fondly remembered by many as the highlight of their New Orleans (correctly pronounced N’ Awlins) sojourn, but not by us. 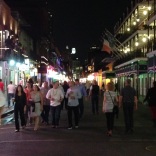 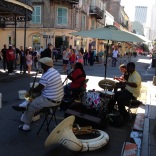 A touch of voodoo magic ala Haitian antecedents 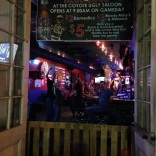 If they saw the street, as we did, overflowing with smashed, noisy people, carrying large “go-cups” to keep from dehydrating between bars, shouting to hear each other above all the Jazz/Beat/Rock bands pumping out competing covers on all sides, we’d conclude that they need to get out more. Not pretty – even a little scary. It’s so popular that traffic is stopped for the evening so the crowd can have the whole street!

Back at our quiet hotel the desk staff laughed, “We never go to Bourbon Street; it’s only for tourists!”

A pleasing set of menus….

Because our N’Awlins’ dates clashed with Halloween, and our accommodation budget couldn’t cheerfully treat hotel accounts tricked to four times their usual size, we had but two short nights to give this wonderful city our best shot. So we grooved out in the French Quarter on down home Cajun grits and pralines, 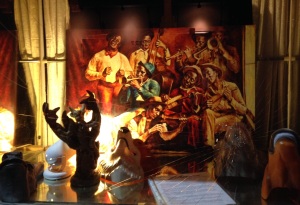 overloaded ourselves in boutique art shops, power-listened to our great Girl-guide on the best bus tour of the city,

And the band played on 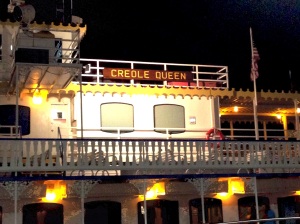 Dinner at 7.00 on the Creole Queen 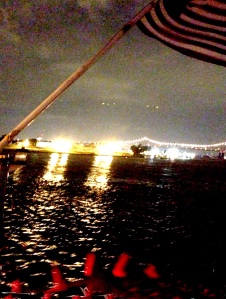 Several Daquiris later, the world took on a different slant…

and dined royally on the Creole Queen up and down the Jazz scale, washed generously down with Margaritas and Blue Bayou Daquiris sweetened with pralines brought to Louisiana by the French Settlers because of the abundance of sugar and pecans.

Onboard the paddle-wheel steamer “Creole Queen” for a dinner cruise, we met Elizabeth and Mike from Austin Texas. Annie had picked Mike straight away for a bikie when we’d seen them boarding.

Liz and Mike in mellow mood…

Sure enough, the 60+ couple had, that very day, ridden 500 miles on their Harley! We had a lively chat about him leaving her and her leaving him; their reunitings; his being a tattooist for 30 years; his tattoos; her tattoos; their son’s tattoos! They seemed pretty happy with each other – for now?

Next stop Memphis, Tennessee, “…on the train they call The City of New Orleans”.  which was saved from imminent decommissioning through the power of its story as chronicled by Steve Goodman in 1971, made famous initially by Arlo Guthrie, then Willie Nelson, then everyone who’s anyone plus the creators of “Good Mornin America.”

Such a long, scary way through Bayou swamp and Mississippi Delta waters

Best bits, apart from riding that iconic train itself, were 1. crossing the 5.8 miles of railbridge over the waters of Lake Ponchatrain on the Mississippi Delta, which, who cares if it is or isn’t the longest in the world – it was scary enough seeing the cars go past in parallel with us on the longest highway bridge in the world 2. dining with Martin and Pam, a fabulously agreeable, multi-talented and accomplished pair of best-culture/agriculture practice advocates in and of Milwaukee, Wisconsin and beyond, who felt sufficiently safe with us to admit being Democrats; and 3. being satisfied that the observation by a fellow passenger, looking out her window that “those woads are lockinbarr”, translated to “those woods are looking bare” – because they were!

Martin and Pam, “social dining” companions on The City of New Orleans

Memphis…a sad, deeply-wrinkled city we thought, which far from growing old gracefully, desperately flogs its ancient relics in the hope no one notices they’re plastic facsimiles made in China, and that current Memphis posterboy, Justin Timberlake, is unlikely to ever graduate into long pants, so far is he from approaching the ecclesiastical bootsize of his glorious predecessors. 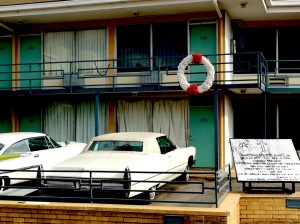 Where Dr Martin Luther King Jr. was assassinated and his dream became a legend

On a shopfront in Beale St, where the President should feel safe, or should he? 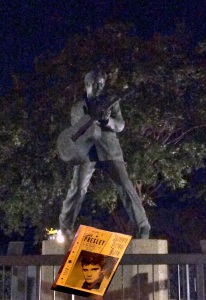 Where would Memphis be without Elvis? 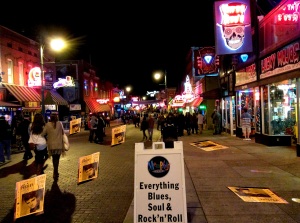 Beale St on Halloween, where Elvis has left all the buildings…

So we high-tailed it on to Nashville by Greyhound for a four-nights/three-day stay on a houseboat at the Port of “Old Hickory” on the Cumberland River, a distant relative of the Mississippi…

very tranquil but far from the city and unserved by any public transport, which prompted us to try “Uber” for the first time. If you haven’t tried it, next time you need a taxi, download the app and be amazed as we were.  Uber is great! It helped us get into and around Nashville and back to the boat, for about a quarter the cost otherwise. And all the drivers were friendly – all going that extra mile as it were, sometimes two. We were the second passengers for our first driver, Greg, a manically “retired” Tennessee native (as in born there), now living six months about in Tennessee and Kalamunda, Western Australia where he listed an extraordinary range of business, mining and investment interests. He dropped us at the history wall, let us ride free, and would’ve wined and dined us with his wife the following evening had we not had a prior commitment…. 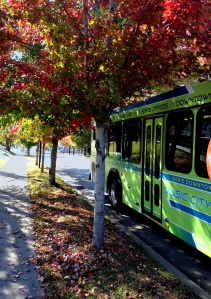 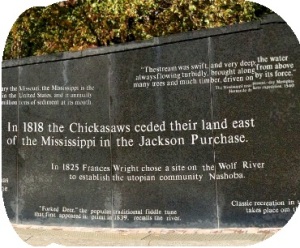 with our even more manic host, Steve. Steve just loves boats and thinks “anyone who can’t relax around water, well – they just can’t relax anywhere”.

Awake with the daily sunrisers on Old Hickory

Steve collected us off the bus from Memphis with his lovely teenage son who’d bought him birthday tickets to that night’s touring “Queen” performance, plus dinner, which meant a rush for him to drop us 30 miles away, then get back, have dinner, and get seated before curtain up….

Wooden pews, worn shiny by worshippers at the Mother-church of Country Music 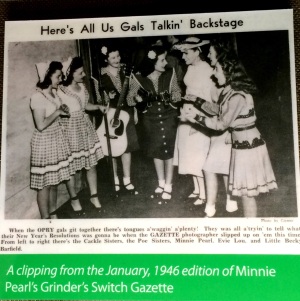 Deriguear at The Grand Ole Opry

and while we immediately felt the maelstrom force of Steve’s tempo, it all blended with the powerful warmth of his generosity which persisted the entire time we were there, until he waved us off at Nashville airport in time for our dawn flight via Charlotte, North Carolina, to Unicoi in eastern Tennessee. So thanks to you Steve, and to your wonderful friend Carol who was our tour guide/driver/cultural advisor on our Saturday morning shopping spree….but we certainly do wish you’d relax a little more often!

Morning from The Toms’ balcony over Buffalo Valley Golf Course to the Smoky Mountains of Cherokee National Park, late fall

How wonderful it was to be so warmly welcomed to Tennessee by the very gentle, kind and unflappable Loretta Toms, who Annie used to work with a dozen years or so ago in Alice Springs.

And we hadn’t aged a day! Nor put on a single extra pound!…uhuh …Loretta and her husband, Jim, collected us from the Tri-Cities airport and transported us deep into the late fall colours of them thar Smoky Mountain woods for a week of down home southern comfort…

What? Not bootlegged? Is nothing sacred?

which it was, with bells on.

The most fabulous Jim and Loretta, thank you so much for giving us this very special experience of your great country.

Who can tell us now where that week went? Into alotta talk’n food, n wine, n trips to the store, 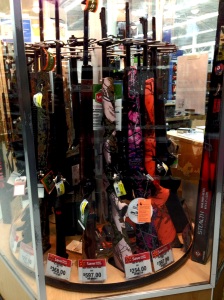 ‘n to this ‘n that town, ‘n some of watching Jim blow leaves….’n learning new applications for spoons and chicken feet…’n sternly assessing Jim’s cocktail repertoire, then? Wal, then, after a modest sleep-in, we’d just start over…

Until the time was sadly up and we were safely deposited back at Tri-Cities airport for our NY departure to Ireland via – yes, Charlotte, NC, for the 3rd time. Since that sentence, this blog post has been updated and now The last paragraph has been lost.  So I must say again how absolutely touched we are to have been looked after with such  warm care, grace and humour in the home of Loretta and Jim. (See Janet’s review of your effort which speaks for itself!) we can only hope to meet again sometime across the miles. That we will ever be able to return the pleasure is doubtful, since they don’t plan a return visit Down Under, so herewith we post the invitation to your family to make sure you take it up should you ever plan to come our way. 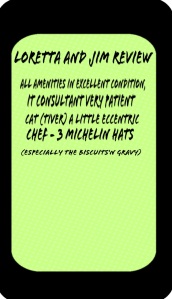 Yes, we did enjoy those biscuits with white gravy for breakfast. 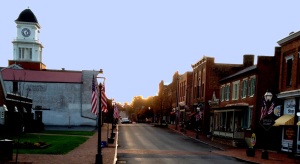 Although moles hold no particular attraction for us, when we moved to Tasmania in 2003, we lived in Mole Creek. With hopes of fitting in sooner rather than later, we embraced the name in our e-mail account. Now that we are heading off on our globe-trot we thought we'd maintain solidarity with moles and even give them an outing, hence the curious id.... -And since Annie's late Mum, Gwen, was pleased to call herself Molesmama, she's coming too. Not lost on us is the marvellous ambiguity inherent in the word and the notion that very little is known about these small, sleepy, dark-dwelling creatures....
View all posts by The Moles →
This entry was posted in Extra, Home, Moles Vent. Bookmark the permalink.

4 Responses to From Big Easy to Bootleg…..