7 days and nights in Istanbul, how wonderful. Very busy donning the veil, visiting mosques, neck craning to sweep the domes, wandering through palaces, harems and gardens.
Planes, trains, buses, and trams all very crowded, seats were offered if scarce, however standing is preferable to sitting under an umbrella of sweaty armpits.The day on the Bosphorus cruising between the European and Asian continents was very easy and a welcome relief from the hustle in the city.
The magical Blue Mosque, almost our neighbour when we moved to Sultanahmet and its dawn call to prayer very beautiful. Bargaining in the Grand Bazaar, spellbound in twirling Dervish skirts and arms and hands and feet.

Our hosts at both hotels were wonderful especially Jahlal.
Turkish food, how smug we felt ordering in restaurants and cafés in Istanbul/notConstantinople after having done our back street eating tour in Dubai where much of the middle eastern cuisine common to Turkey, was presented and explained.
The tourist is a strange beast, worth some study. Do they leave their safe comfortable cocoon homes and gird themselves in spiky studded armour with a megaphone attached? I am constantly appalled at the everyone-for-themselves attitude: “out of my way, I’m first”.

…and then we have to identify as one of them. Oh no – not one of them! 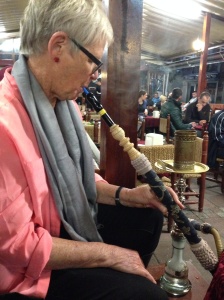 But no point trying to look like a local, and truth be told, the Turkish tourists, who are absolutely everywhere in numbers, have clearly all taken first class Honours in Assertiveness. Mild-mannered Moles could do well to take some tips…and just journey forth in slightly more muscular modes maybe, madam. But this identity shapeshift thing is real. Because the tourist stereotype is an awkward one to bear and we’re already weighed down enough with our 12-months of away-from-home carry bags (yes, me more than Janet) plus planning stops in each next town which snatches the time we’d rather be spending seeing and doing the things that tourists come to see and do….it’s a bit circular, you see. And contradictory, you also see. Never mind – we’re graduating every day to new levels of competence in negotiating the world in the preferred category of “traveller”.
It’s election time (local councils) in Turkey as you have probably heard and the spirits of democracy are rampant abroad so Twitter and U-tube are blocked by order of the Dear Leader. Tomorrow the vote so we will soon know if the good folk of Istanbul have set the path for a change or a no-go with the stasisquo…Either way I doubt it much matters to the 10-billion at least dome-roaming cats of Istanbul, nor prompt a Dervish to a single false step….