We started north slowly as there was plenty of time before our rendezvous in Santiago de Compostelo with Portugese Peregrine amigos, Alison and Monica.

Zaragoza is a beautiful city oozing with reverence for its Roman history and is named for the first Roman Emperor, Caesar Augustus (CA).

The myriad anniversary celebrations of his death 2000 years ago, while we were there, included a play we saw called Julia. It turned out to be a monologue, delivered in Spanish of course, by the central character, so all but the heavy underlying emotional bass notes alluded us. Pity that, because Julia Caesaria (39 BC-14 AD) was CA’s little known only biological child who, having divorced her mother immediately after her birth so he could remarry, married her off to three consecutive husbands,including his stepson, Tiberius, he thought would prove useful political assets to his future. Then, having borne her father a goodly number of heirs, none of which, curiously, survived long enough to inherit the office, he exiled her to a barren island for alleged extensive “shameful promiscuity”! His own professed deep, religious convictions, forced this public gesture. He was conferred God status posthumously; his daughter died in exile on the island. Is it something about the name Julia that attracts top-drawer treachery and intrigue?

If Caesar Augustus was the curly headed boy around here, the favourite girl……well, one of the basilicas we visited was the Cathedral of Our Lady of the Pillar, built by Spain’s lead Christian evangelist, St James, having “seen” Mary standing on a small stone pillar with a modest wooden statue of herself and asking he honour her in this way. For the past 2000 years to this day there is a line of people every day waiting to kiss this statue. Needless to say we resisted sharing our pagan germs with the holy ones!

Next stop was a small high density coastal town, filled mainly with retirees and their very small dogs who most definitely called Castro-Urdiales home, as we were reminded with each careful step between the footpath messages. We had hope to nest for a week close enough to Bilbao to day-trip to Frank Gehrey’s splendid Guggenheim, which is all and everything plus more beauty than the human heart can bear without being rendered fat and bloated with shameful bingeing. Pictured here without benefit of flattering light, is the forecourt, featuring a mammoth spider by the late French sculptor, Louise Bourgeois, called Maman, a clanging name, packed with complexities relating to her deeply contemplated emotionalities around motherings.

Castro-Urdiales itself may have been more appealing had the Spanish rain kept faith with its reputed confinement “on the plains”. But, alas… Santander, Comillas, San Vicente de La Barquera…..rain, rain, fabulous but grey-day-making rain. So we moved inland on the very morning the wonderful sun showed itself again! 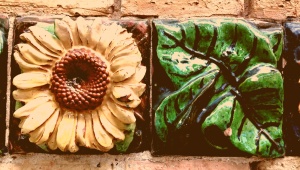 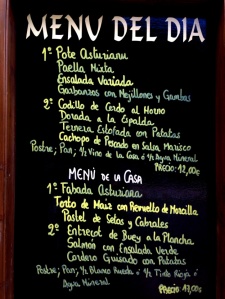 in Covadonga in the western foothills of the Picos de Europa (working) National Park. In July 1918, Don Pedro Pidal, marquis of Villaviciosa, became El Primo environmentalist in Spain by implementing the first of the Spanish laws which commissioned National Parks,creating “”Montaña de Covadonga”, the first National Park in Spain, with a surface area of 16,925 hectares. More than seventy years had to pass so that a new law, enlarging the National Park established limits, was approved by Parliament. On the 30th of May of 1995 the National Park of “Picos de Europa” was declared; embracing an extension of 64,660 hectares, converting it not only in the largest National Park Spain, but also in Europe.”

…from the appreciation centre at the Picos park…

Yes, the beans tasted great but the Foodie Fotografia is yet a bite amateurish… ….totally without hubris unlike some Others in this national park, like the celebrated endangered wild brown bears, assorted chamois, herds of cows plus their nervous bull minders. But little did we expect to find, as we drove (yes, shakily drove) through the elegant beech forests en route, that we would encounter kindreds of our namesake kind! as well as one of their close familiars, Desmon Iberico, who spoke fluent Pyrenees Mole which we thought sounded very much like Meander Valley Platypus. 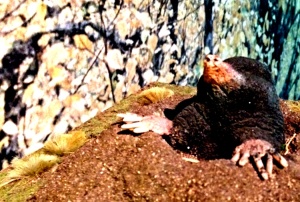 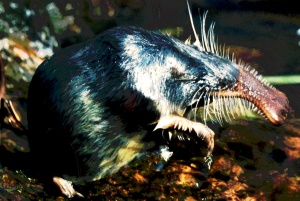 We have noticed no grey haired women in Spain – not even the very very old. Occasionally our grey heads are recognised for their great age and marvellous wisdom and we bare revered as “jubiladas” (Seniors). Truly jubilant when discounts are up to 50%. So… Ladies in Spain we adoradas ‘specially since we became jubiladas…. 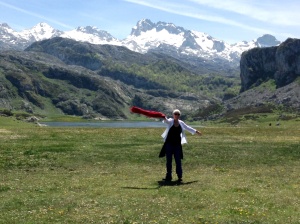 The hills come alive for a Jubilada…

2 Responses to Molesagoza to Zaragosa