Our Spanish adventure is over.

I must say we enjoyed the northern half better than the southern. Remember when the south of Spain was the place to be? But even 40 years ago I liked the north much more than the south. Cordoba was the exception, it sparkled for us: the old city, the exquisite mesquite, the Roman bridge across the mighty Guadalquivir River; Royal Andalusian horses dancing on tip-toe, the full-footed, staccato stamp, strum and clap and whirl of Flamenco; and not forgetting the tender touch of rabo de toro (tail of the bull….or, as some may better know: osso buco), all clamouring for our attention…

Strong emotions make lasting memories, so they say…6 weeks on from Cudillero and the memory of Señora and Señor refusing to relax their heating rations to our apartment still rankles, I’m afraid. Turned on between 5-11pm, despite the meagre 10 degrees of your average early-May Cudillero day, and we shivering two, confined within 3-foot thick Roman stone walls, 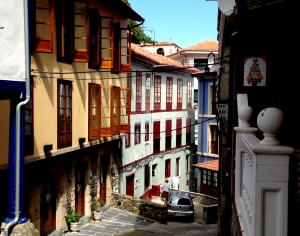 due to constant grey drizzle and wind, and Annie’s bronchioles filled for a 2nd time with muck. We had booked a week there, Cudillero reputedly being one of the finest examples of sleepy fishing villagery left in northern coastal Spain.

Cudillero on a clear day

So we felt trapped and defrauded both by the weather and by the people. And no that’s fair to neither the people nor the place, but do we forgive Cudillero? Mmmm… Would you? Of course you would! Just look at the place! Beautiful! You can just feel all those otherwise warm, friendly fishing-connected folk living there. But our on-line review of that accommodation for the booking site certainly lacked no critical detail – nor emotion!

Signposting the Camino for the Pilgrims’ progress

From there to the peaceful otherworldliness of very, very famous place of religious sanctuary, Santiago de Compostela in Galicia, the NW corner of Spain. Santiago de Compostela, is the end of all the Caminos across Spain and we positioned ourselves perfectly to spot our ardent amiga peregrinas, Alison and Monica arrive from their 200km walk from Portugal. It was a joyous reunion. 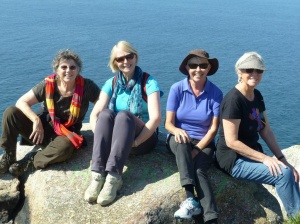 They were in good spirits and totally enthralled with the whole experience. We felt so good about it we went to the pilgrims’ blessing MASS – twice! The cathedral mass has beautiful singing and the BIG attraction is the Bota Fumeiro (thurible magnum). The incense burner weighs 53kg, but when loaded with charcoal and incense, it’s about 100 kg, and takes 8 monks to swing on the end of a rope. And they swing it high the length of the church. With that and the music it even made this unbeliever tear up. Annie caught it moving beautifully on her mobile.

The food and the wine were just fine, but the Cherry liqueur! And I mean real cherry liqueur chocolates, Spain has the best, beautifully wrapped, dark chocolate, great cherry brandy, so affordable and Delicious!!! I can enjoy 2 in a row after a tasty dinner and 2 glasses of red wine.

A most appealing public sculpture of two women in Alameda Park, a major point of entry to the city, provides some ‘welcome stranger’ warmth and cheer for many a weary pilgrim.

Las Dos Marias welcome the weary to their holy city…

It is the tribute to Coralia and Maruxa Fandino Ricart, known as Las Dos Marias (The Two Marias), by Cesar Lombero, 1994. They were two of eleven children born around the turn of the century within a family local to Santiago de Compostela. Three of their brothers, being anarchist trade unioinists, politically antagonised the fascist Franco regime which wanted to arrest and imprison them. Convinced the brothers were being hidden by their family during the Civil War, Franco’s thuggish forces subjected the family to extensive, violent harassment. In the early hours of any random morning, police troops would force entry, demanding the brothers’ whereabouts. Their treatment reportedly included stripping the women and parading them naked through the streets. Reports of the sisters’ rape and torture abound, but have not been officially confirmed. Why Coralia and Maruxa then implemented their strict routine of parading themselves through the city, every day at 14.00hrs precisely, come rain; come shine, dressed in the avant garde high fashion of their own creation, and which persisted for the rest of their 80 odd year-lives, is an enduring mystery.

Jose Ledesma Criado, lawyer, poet of Salamanca who would have liked to know more of Las Dos Marias, but Annie couldn’t tell him.

Was it wild immodesty? Was it the ritualistic compulsion of the obsessive? The harmless antics of an eccentric pair of spinsters? A credible response to their former bastardisation by a powerful totalitarian regime? Were they just mad and therefore a wholly tragic phenomenon. Should the questions even be posed? The sisters died in the early 1980s and it seems no one is left now who can answer these questions with any confidence.

La Macarena, “Our Hope” – the most beautiful Virgin of Seville and of Spain

…the full-footed, staccato stamp, strum and clap and whirl of Flamenco..

Perhaps this reflects the historically low public profile of women generally in Spain. Apart of course from the ubiquitous one and only Maria herself, we saw very few public references honouring achievements by women: no monuments, no dedications, and certainly no women artists in the fine arts galleries we visited.

So this one painting from the Oviedo gallery is here placed to note an oversight, one captured in the defiant gaze of the peaches and cream sitter who dearly loves her Fran…. 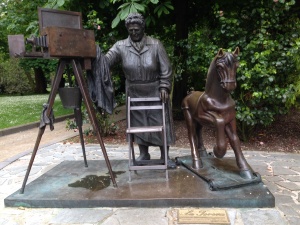 “La Torera” – her nickname has roots in the bull-ring, where a matador arrogantly breaks the rules and hang the consequences.

Although, to be fair to Oviedo, they did have some fabulous statuary that was most respectful of local women heroes. For example, La Torero,”born in the late 1800s”, pioneered Spanish photography through her invention of a breakthrough exposure/timing technique and perfecting some unique portraiture practises.

The last word of our Spanish sojourn must go to Señor Gaudi. Since we had to return to Barcelona to collect our oversize wheelie bags, we finally took the opportunity to visit his biggest life project which proves Janet’s theory that I’m sure is correct: “When Gaudi was a child he was abducted by aliens. They took him for a ride into the Cosmos, showed him all its wonders and delivered him home to Earth.

The Sagrada Famiglia is designed from his imagination (he thinks) but it is a pretty close resemblance to the interstellar vehicle that carried him on this wondrous journey especially the inside. Just look at the photo, in the spaceship the pods moved up and down the pillars like pistons. How do I know all this? I’ve been in that ship!!”