early June, 2013. Three months ex-Oz…. Coustouge It is a precious thing, when you are a stranger in a strange land, to be given the opportunity to stay with people who live there. Coustouge, a small community in south-eastern France, was just such a gift.

Katherine, Virginia Quin’s sister, has lived in Coustouge with Dave for 35 years. They have three kids, now adults: Molly, who is currently roaming around India; Eddie who lives in Barcelona; and Louie, thankfully a computer nerd who magicked our mobile devices back on track just after he arrived home from SE Asia. Dave has converted the home they bought 35 yrs ago from a sad almost-ruin into a beautiful home. 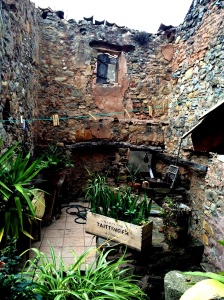 View of a Dave Davies courtyard

He adds lavishly to the charm of the village with his fine and generous stone masonry in public spaces. Their house is part of a “rond” or circular place, in this typical French village of narrow streets, high walls, and shuttered windows with flower boxes in early summer bloom. Just sooo French! The experience was liberally seasoned with the excellent cuisine laid on by Kath and some of the sturdy local (terroir) wines we bought on her recommendation. Delicious oysters fresh from a salty tidal lake would make worthy sister partners to the most excellent Coffin Bay oysters. Kath drove us to surrounding villages thru acres of vineyards and country lanes pointing out ancient ruins and restored chateaux along the way. On our last morning Dave and Kath took us on a rally drive to Narbonne Railway station in time to brunch on croissants and cafe grande before our midday train to Lyon. Thanks a million Kath and Dave – we’ll put out the red carpet for you if you visit us in Oz. And thanks Virginia, for the intro. 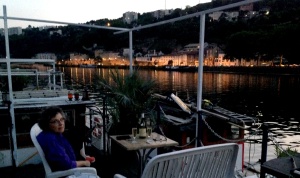 On deck in twilight

In Lyon…we moored in the bow of a houseboat on the Rhone in the city centre and watched the river flow with its cargo in the cool evening air.

Now could that be Farmer…er… Father Ross?

Overheard while waiting for our small wine tour bus in Lyon:
Anxious 1: “I need a cawfee. Do we have time for cawfee?”
Anxious 2: “Forget it! There’s no Starbucks around here!” Reassuring: “No, but don’t worry. There’s a McDonalds. I saw one  just around the corner.”
Anxious 1 & 2 in unison: “Oh, great!”
Now who’d have thought that Lyon enjoys the well-deserved status as the gastronomic capital of France?
…and the thumping heart of Beaujolais……so… 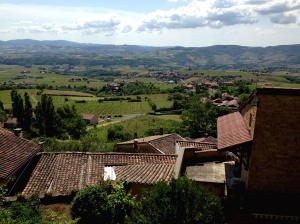 In expectation of happy budding events…

Our tour guide was Sebastian who runs a family tour business, so off we went to the beautiful vineyards of Beaujolais. Lyon, capital of the Rhone Alpes and tasted several different appellations of Beaujolais that are the jewels in the Beaujolais crown. It’s a shame they did not appeal to our respective palates. All the tastings were served in generous portions so by late lunch we were all very friendly! We had lunch on a high terrace in a picturesque French village overlooking a big valley of vines.

Janet, as ever spreading the cheer…even to young Missy Starbucks Palin

Never talk religion or politics around the table? wel-l-l ….two of the company were New Yorkers and one of them enjoyed listening to her own political opinions! Very right wing- so ObamaCare and the US Gun Lobby erupted all over the table. Annie and another Australian woman (Me? Not me. Me kept score) could not resist seeking more clarity and our Miss New Yorker Sarah Palin look-alike duly asserted in spades. Blow for Blow….I hear them still. The excellent manners of the Australian women prevailed of course and a truce agreed. This was a first for Sebastian and we, Beaujolais-mellow, allowed his simple sexist astonishment to go unremarked.

And so to Paris where….All that glitters…. Strolling along the Left Bank of the Seine between the wonderful Musee du quai Branly and Musee d’Osay, sun shining; monuments shining; hefty gold ring on the ground at our feet shining! What? Yes! A woman stoops and picks it up, mumbling to herself (in English) “Oh, I am lucky today!” We smile at her luck as we pass. She turns to us, smiling, calling us back, and asking had we dropped it? “Non”, we say (in best French) “Non”. But she presses it into my hand, insisting she is ‘allergic’ to gold, and this ring is alas of no real use to her. We must accept that Fate intended the luck for us, or else we insult Destiny herself. Despite our protests that she could easily sell the piece on, she walks off beaming happily, generously having delivered this lovely, big softly shining proof of her day’s good fortune into our somewhat sceptical, somewhat eager hands. As we stood all agape, she suddenly turns in dramatic afterthought and suggests that in fact, perhaps, she wouldn’t mind..if..some few euro for a coca cola? So out comes the purse and we start to count out the change. But more is needed, then a leetal more…that’s when we hear our bell toll: “Scam!” (clang really). We try to give the ring back. But “Non, Madame! Non!” only money will do. So we cut the action and she walks off disgruntled with our bits of small, ungenerous change. Not five minutes later we see another woman pressing precisely the same form of “your lucky day” on another target. While she may have been more resistant than us to the primal Gollum impulse, she seems a little crestfallen to hear Annie exclaim with wonder on the extraordinary number of gold rings to be found on the Left Bank today, hinting too that money might soon also be requested if this woman shared her sister-scammer’s expensive taste in coca-cola…The target, grateful and relieved, flees the scene, leaving us facing a shower of elaborately gesticulated curses, some of which Annie haphazardly returns…

They say Paris is the city of love and romance

…so lovers come to pledge their troth…

…in heavy metal hardware that lasts until the bridge falls down… 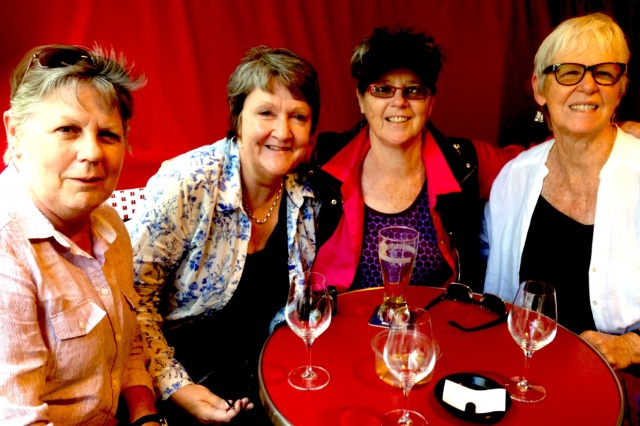 The next best thing to staying with people in a strange land is meeting up with friends travelling in the strange land. We met up with Denise and Maryanne in a cafe for Sunday brunch and then moved on to after-lunch drinks at a bar. Unfortunately our rendezvous was foreshortened due to their prior family commitments claiming their attention, so it was short but very sweet – catching up, swapping observations, tips, comparing gripes, speaking English with third parties for an extended period, getting the lowdown on the lowdown mob rule back home….thank you Girls, we should do it again some time.

And then,in honour of Marie Antionette, another powerful woman subjected to a very shabby press, and who never said “let them eat cake” at all – it was a beat-up – (http://www.todayifoundout.com/index.php/2011/12/marie-antoinette-never-said-let-them-eat-cake/) we will jolly well hoe into brioche and cafe grande and stay out as long as we like!

From the Belle Epoch menu to a selfie on the street, yes it was a fine time at the Moulin Rouge

By way of footnote (as well as a test to see who reads to the end of things) we are inviting you to consider your Xmas plans. We’d love to share our proposed Sicilian digs with some lucky girls…any takers please let us know via a comment

4 Responses to …stretching the French connection….